The Incredible String Band – Wee Tam and the Big Huge

By the time the Scottish psychedelic folk group the Incredible String Band began recording their fourth album in the spring of 1968, their audience was growing both in the UK and US having completed successful tours and selling out venues such as the Fillmore and the Royal Albert Hall.  Their March ’68 release, The Hangman’s Beautiful Daughter, was met with critical acclaim.  With the double album Wee Tam and the Big Huge, released 50 years ago this month, Robin Williamson and Mike Heron honed their creative process, and the result is considered by many, along with their previous album, to be their apex.

Williamson and Heron became more involved in each other’s songwriting.  They also became more of a band as opposed to a duo, as girlfriends Christina “Licorice” McKechnie and Rose Simpson took on more significant roles.  Of the fifteen or so instruments played on the record, McKechnie and Simpson contributed on the violin, Irish Harp, percussion, and bass guitar during live performances in addition to their hippie siren backing vocals.  Though not quite as much as its predecessors, Wee Tam is experimental to the point of avant-garde in some places.  Its lyrics are full of allusions to self-awareness, religion, and pagan mythology (they were indeed an influence on Robert Plant).  This was mostly Williamson’s contribution, whereas Heron wrote more simplistically about nature.

The title is an allusion to a small human (Wee Tam) contemplating the vastness of the universe (the Big Huge), and that theme plays out on the album’s four sides.  Unfortunately, Elektra Records released it simultaneously as two separate albums in the US, using the front and back covers for each release.  The result of this decision was the disruption of the work’s continuity, as well as negatively impacting sales.  Off the top of my head, I cannot think of another such example other than Bruce Springsteen releasing two different albums on the same day.  But those were never meant to be a double album, and time has shown they would’ve been better as one single record.  I digress. 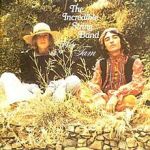 The contrasting approaches of Heron and Williamson mesh really well on this release.  With each listen, I notice different instruments or vocal dynamics I hadn’t heard before.  The songs continue to use a Western folk structure, but are complimented with Eastern sounds of the sitar and sarangi.  The lyrics and backing vocals are exotic instruments in themselves.  The opening track, Job’s Tears, is surreal and serene with Williamson’s vocal intertwined with the backing vocals.  You Get Brighter is another favorite of mine.  Along with its guitar and harpsichord track, I hear a beautiful melody with simple, repeated lyrics:  “Krishna colors on the wall, You taught me how to love you…”  And, the sprawling Maya, which opens the second disc, sets the tone for the remaining tracks which are mostly dominated by Williamson’s surreal lyrics.

The Wee Tam portion is considered more accessible than the second disc, but to me it’s a cohesive, four-sided,  aery and dreamlike sequence.  It’s considered less ambitious than The Hangman’s Beautiful Daughter, but not to my ears.  One minute you’re at a ghat in Varanasi hearing sitars wafting in the wind, the next you’re sitting in an ancient Scottish church with a pipe organist playing a mournful dirge.  It takes an investment of time and attention to hear all there is to absorb with it, but not in the same vein of, say, Captain Beefheart’s Trout Mask Replica, other than to say these guys were from some place else, artistically speaking.  As Tony Hardy wrote in his appreciation on consequencesofsound.net:

As much as the playing shimmered with virtuosity, there was also a coy, amateurish side to the band, which was endearing to fans and annoying to everyone else. Their ramshackle approach, particularly on stage, was a real part of the band’s charm and what made them one man’s meat… It is nature’s roller coaster ride. It’s green before its time, haunting and plaintiff, spiritual and uplifting, funny and sad, baffling and informed, and it should be in everyone’s record collection.