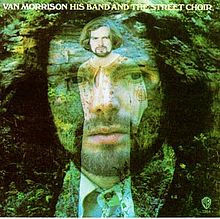 Van Morrison’s fourth studio album, His Band and the Street Choir, was released half a century ago today. It was recorded over two sessions in New York’s A & R Studios in the first half of 1970, and released less than a year after Moondance. By the time the album reached stores, it had been renamed from Virgo’s Fool without Morrison’s consent. Despite the overall long term success of Street Choir, which peaked at 32 on the Billboard chart and 18 on the U.K. album chart, Morrison has expressed displeasure with seemingly everything to do with the album. He originally intended to record it a cappella – hence the “Street Choir,” but ultimately abandoned the idea when he became dissatisfied with the result.

Critics noted the songwriting is a bit simpler than on the previous two albums, and that the tracks are more R&B inspired with only hints of folk. But simpler isn’t necessarily a bad thing, as there is an element of joy in these songs with minimal overdubbing which were inspired by the likes of James Brown. Singles from the album included the gospel-inflected Call Me Up in Dreamland, plus Blue Money and Domino, the latter being the most successful single of Morrison’s career. Some of the songs on Street Choir were originally intended for the Astral Weeks and Moondance albums, which Morrison rearranged for the personnel on this release. These include I’ve Been Working and Domino, his tribute to Fats Domino. Other lyrics were inspired by his marriage, such as in I’ll Be Your Lover, Too, Call Me Up in Dreamland, and Sweet Jannie.

By almost anyone’s standard, His Band and the Street Choir could be a career-making album. This is a good album with a couple of strong singles. Highlights for me include the soulful Crazy Face, I’ve Been Working, the whimsical Blue Money, and album closer Street Choir. I prefer the live version of Domino on 1974’s Too Late to Stop Now to the studio original. Perhaps I’ve heard it too many times. But in the context of the creative streak Van Morrison was on at the time, this album just isn’t as interesting to me overall as those preceding and following it. I’m more of an Astral Weeks/St. Dominic’s Preview/Veedon Fleece kind of guy, though I’m certainly not turning my nose up at Street Choir. As Stephen Thomas Erlewine noted in his 2015 review in Pitchfork, the album is “all about the rough and tumble joy of living,” and Van the Man did it well enough for this to be considered a classic.