February 1968 was a little lighter in the album release column, so I thought I’d take my first non-50th anniversary rabbit trail.  But before I do that, a few loose ends from the first two weeks of that month.  I shouldn’t put it like that; lives were at stake in some instances and I don’t mean to trivialize it.  On February 1, a couple of days into the Tet Offensive (see previous post), the execution of a Vietcong prisoner was captured on film by AP photojournalist Eddie Adams as well as an NBC news camera.  It’s still a shocking image fifty years on.

The prisoner’s name was Nguyen Van Lem.  Lem had killed a South Vietnamese Lieutenant and murdered the officer’s wife and six kids before leaving them in a mass grave.  Ironically, his executioner, South Vietnam’s Chief of the National Police Nguyen Ngoc Loan, might’ve disliked the U.S. as much as Lem despite being on “our side.”  Yet he lived out his post-war life in suburban D.C. with his wife and five children while running a pizza joint before succumbing to cancer in 1998.

The next day, February 2, Nixon declared his candidacy for president and the madness would only get worse before it subsided.  On one hand, I look back at these periods of history and think it shows we’ve managed to overcome difficult times as a nation and planet.  But then I wonder if we ever really got through it.

On the lighter side of life and death, Elvis and Priscilla Presley’s daughter and only child Lisa Marie was born on 2/1/68, and Jimi Hendrix was given an honorary diploma from Garfield High School in Seattle, as well as the Key to the City, on 2/12. 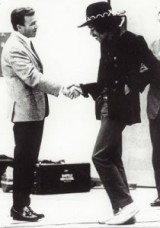