It’s time to begin wrapping up another month of 50th anniversaries in the music world (with a couple of diversions) by tying up some loose ends.  I’ll spread this out over the next few days.

By the spring of 1968, the short-lived Springfield had had enough.  Artistic differences, drugs, etc., etc., had taken their toll, and after their gig at Long Beach Arena on the 5th, they split.  Richie Furay and Jim Messina subsequently compiled some tunes from ’67 and early ’68 into what became the third and final Buffalo Springfield album, Last Time Around.  Stills, Furay, and Young reunited as Buffalo Springfield for a few shows in 2010 and 2011, but plans for a tour in 2012 sputtered away with Neil being Neil.  A recording of the Long Beach Show from ’68 is available on YouTube, but the sound is so bad I’m not going to bother adding it here. 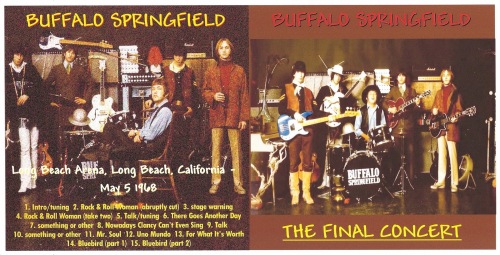 Rhino Records will release a box set of the three studio albums at the end of next month which will include new stereo mixes of all three and mono mixes of the first two.  The mastering of this set was under Neil’s supervision, but so was the original Springfield box when he chose not to include Last Time Around (which he wasn’t around for when originally compiled in ’68).  I won’t be re-purchasing all this music, but I love this band.

Fifty-year history repeated itself with the recently concluded English Premier League season, with Manchester City taking the top spot by an astonishing 19 points over second place Manchester United.  But in 1968, prior to the establishment of the Premier League when it was simply called the First Division, the title wasn’t decided until the final match of the season.  City won at Newcastle while United lost to Sunderland, giving City the title.  Coincidentally, City had a player named Neil Young who scored a couple of goals in that game (my apologies to my more knowledgeable friends who might read this if Young is a famous footballer).  United went on to win the European title a couple of weeks later. 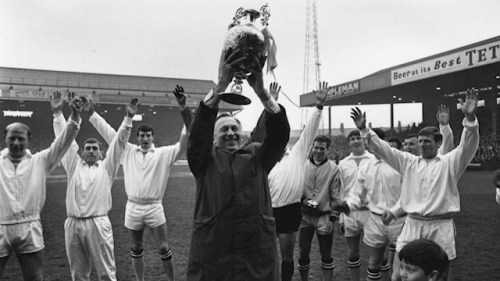 There was a day when sports were just as important to me as music.  While I’m still generally aware of what’s happening in American sports, I don’t bother to watch or pay close attention unless one of the teams I’ve traditionally followed is playing well.  I don’t think I even qualify as a fair weather fan anymore.

However, as my interest in American sports has dramatically declined, I’ve found a new sports outlet over the past ten years or so:  English Premier League Football and its associated leagues and cups, including the Champions League.  I think one of the main reasons I enjoy following the EPL is because I can do so while ignoring all the off-pitch drama of the modern athlete armed with social media.  I realize controversies and drama exist with Euro footballers, but we’re just not bombarded with it in the states the way we are with contract disputes and legal issues of American athletes.  If that ever changes, I’ll be off sports completely.

John and Paul made their first stateside visit together since the Beatles’ final US tour in ’66 to introduce their new umbrella business organization, which they founded after the death of manager Brian Epstein.  A typically acerbic Lennon, now firmly under the yolk-of-Ono,  explained what the new company was all about at the press conference:

It’s a business concerning records, films, and electronics. And as a sideline, whatever it’s called… manufacturing, or whatever. But we want to set up a system whereby people who just want to make a film about (pause) anything, don’t have to go on their knees in somebody’s office. Probably yours.

Gosh, with such a concise business model and pleasant spokesman, it’s hard to understand why Apple was such a failure while they were still together!  Whatever.  Apple was a great idea, ahead of its time.  Unfortunately there were too many lunatics running the asylum. 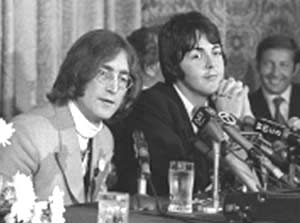 That same day, they appeared on The Tonight Show, only it was guest-hosted that day by former baseball player (and one of my favorite baseball announcers of all time) Joe Garagiola instead of Johnny Carson.  It just didn’t work, and the boys (especially John) were visibly and audibly uncomfortable being interviewed by someone not exactly showbiz savvy.  An apparently drunk Tallulah Bankhead was the other guest, and she had plenty to say while John and Paul were on stage.  Unfortunately for recorded history, NBC had a practice of erasing their tapes after a period of time, thus the only recording we have is by fans.  There is a clip taken from a Super 8 camera on one YouTube posting, but the sound is awful.  Here’s the cleaner audio for posterity: