Pt 1:  The Grateful Dead in My Music World

I’ve waded into these waters today with a minor sense of trepidation.  I don’t consider myself to be an expert regarding all the music I write about, far from it.  And I’m not quite sure how to approach artists like the Grateful Dead whose music, history, and legacy are held in such high esteem by their hardcore fans, yet completely misunderstood if not outright disliked by many others who haven’t spent any time listening to them.  That is, beyond Truckin’ or Touch of Grey when heard on the radio or wondering what the heck all those now-fading stickers on the backs of those equally fading VW buses are all about.  I consider Frank Zappa to be another such artist.  There are simply too many layers to those onions for the uninitiated to offer a value judgement based upon a few songs or one album (or a perception of the fan base).

When it comes to the Grateful Dead, I consider myself a fan, but one whose education is rather incomplete.  I had a very good introduction though.  Besides my older brothers and my uncle, the most significant influence on my musical knowledge and taste to this day is my friend from my home state of Missouri, Mitch.  He’s the older brother of my childhood best buddy, Doug.  Mitch is by far the most knowledgeable fan of the Dead that I know, and while he most certainly is a Deadhead, I hesitate to lazily label him as such due to his crazy knowledge of everything from 1980’s Brit pop to bluegrass.  When I was plastering posters of Madonna on my bedroom wall in the mid-80’s, Mitch was comparing/contrasting various bootleg recordings of Help On the Way–>Slipknot!–>Franklin’s Tower.  (I’ve always been a fan of the classics even through the 80’s, but puberty does strange things to a person.) 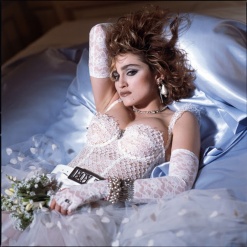 But like many others my age, I finally began to wake up to the Dead due to the commercial success of 1987’s In the Dark, and let’s face it, MTV.  That still seems so ironic.  Around 1990, Mitch bestowed upon me a ten cassette sampler of shows which I have to this day.  My favorites right away were the 1977 shows from Cornell and Buffalo, which put me in alignment with many fans who are much more knowledgeable than I.  Where I probably run afoul, however, is that I’ve yet to gain a full appreciation for Ron “Pigpen” McKernan.  And that’s to do with his vocals and not his musicianship.  The Keith Godchaux years (sometimes despite his wife Donna Jean’s participation in the group) are the most audibly enjoyable to me.

One element of the Grateful Dead that I’ve never fully grasped is that there are really two separate bands we’re talking about:  studio Dead and live Dead.  At the risk of sounding like a social anthropologist doing field research, it seems that if one is a “deadicated” fan, i.e., a Deadhead, the band’s studio albums are more or less an afterthought.  And I can see how that might be if one has followed them across the land and dived into the deep end of collecting/dissecting/trading shows.  Mitch and my other Dead aficionado buddy Jason agree:  The studio albums are but templates for what they could achieve on stage.  It’s a different world altogether, and I’m slipping into territory I can’t speak intelligently about.  But what about the rest of us more casual fans?  There’s some mighty tasty stuff on those albums, too, and I’m glad we have them. 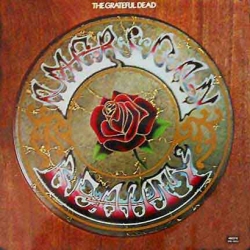 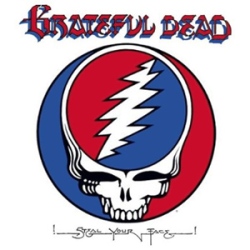 By the time I finally got a chance to see a Dead show it was June of ’91, and their latter year resurgence was peaking.  Unfortunately, I was a walking tie dyed newbie cliché wandering around the grounds of that amphitheater in Bonner Springs, KS.  I tried to make up for all those shows I never saw all in one day instead of just sitting there on the hill with a clear head enjoying some masterful improvisational musicianship from one of the greatest  bands of all time.  I own an audience tape from the show, but its quality I would deem to be, how shall I say, crap.  It was the only opportunity I would have to see them live, and within a few years Jerry was no longer with us.  Youth:  wasted on the young.  Or, in my case in June of 1991, youth: young and wasted. 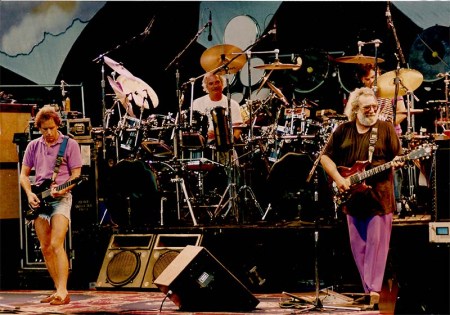 Holy Moly, the Intergoogle strikes again!  While thinking just now about the ’91 show I attended, it occurred to me to do a quick search to see if anything popped up.  Sure enough, here it is.  The cameraman must’ve been dancing, tripping, or both, but wow! I was there!  Actually, at this opening portion of the show I was shuffling through the dusty Third World marketplace that was the parking lot, trying to get to the gate.