Today we’re celebrating the Golden Anniversary of an early standard-bearer in the hard rock/metal genre.  Truth, the debut for the Jeff Beck Group, is one of those albums you might put on when you arrive home from work on a Friday, crank the volume, and just hope that the neighbors like it, because they’re going to hear it.  Blistering music for a blistering time of year.  The original lineup included Beck on guitars, Ronnie Wood on bass, Micky Waller on drums, and then-consummate front man (where have you gone?) Rod Stewart on vocals.  But they had more than a little help from their friends on this blues based recording.

Truth is mostly comprised of covers, beginning with the opening track Shapes of Things, which is a tune from Beck’s previous stop, the Yardbirds.  The album is also a continuation of the love affair English guitarists were having with Chicago blues; even the “originals” (credited to “Jeffrey Rod,” i.e. Beck and Stewart) are reworked Buddy Guy and B.B. King songs.  But the direction in which Beck took them was more aligned with Hendrix and Cream (and the simmering but as-yet-unheard Zeppelin).

My favorite track is the instrumental Beck’s Bolero, which features a very interesting lineup:  Besides Beck on guitar, Nicky Hopkins plays piano, John Paul Jones is on bass, Jimmy Page (uncredited) plays 12-string electric guitar, and Keith Moon (credited as “You Know Who” for contractual reasons) is on the skins.  It was also Page who wrote the song. (Jones, Hopkins, and Moon also play on other tracks.) 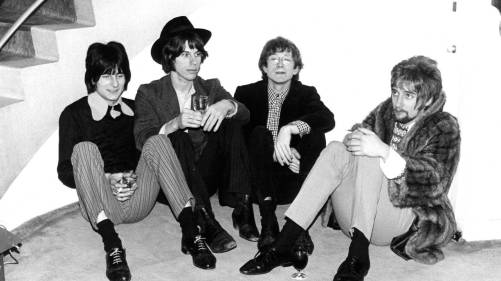 Musician, band leader, engineer, A&R man, and music critic extraordinaire Al Kooper (whose name may end up gracing these pages more than anyone else, at least for 1968) shared his two very different opinions of the band in his September 1968 review in Rolling Stone, after first hearing the Jeff Beck Group live early on prior to listening to the album:

It was an unnerving experience to hear the Beck group. I had to leave after three numbers. The band was blowing changes, the bass player was losing time, Beck was uncomfortably and bitingly over-volumed, the singer was doing deep knee-bends holding the mike stand like a dumbbell (original, but so what.) It didn’t make a hell of a lot of sense to me.

But his evaluation of the record is much more positive:

As a group they swing like mad on this record. It remains to be seen what will happen to them in person. I hope the public is honest enough to make them work out.

Bruce Eder points out in his AllMusic review that Truth was “a triumph — a number 15 album in America, astoundingly good for a band that had been utterly unknown in the U.S. just six months earlier — and a very improbable success.”

And, given that the group’s follow-up album (Beck-Ola) a year later is a brief 30 minutes long, you could probably go ahead and squeeze it in as well during Friday evening cocktail hour for the full Jeff Beck Group experience before the neighbors call the cops.

Here’s a Jeff Beck Group show at Louann’s in Dallas, July 19, 1968 (the club is long gone, but was just a couple of blocks from where I’m presently employed):