1968 saw four album releases from attendees of that well-known spiritual retreat which took place in Rishikesh, India at the beginning of the year.  The Beach Boys released their album Friends in June, and in October Donovan released his classic ode to time spent with the Maharishi.  Perhaps lesser known (even though it sold a million copies) but still very significant is the work of jazz flautist Paul Horn, who recorded his album in April while still in India, although the exact release date other than the year 1968 seems to have been lost.  Today I’m celebrating these second two releases.

Donovan Leitch is a bit of a mysterious figure to me in the world of music.  He isn’t nearly the self-promoter that many of his peers are/were, and it’s never really occurred to me to learn much about him (his autobiography is now on my reading list).  Without looking it up, I have no idea when the last time was he toured the US or what he’s done in recent years.

Is he considered an influential “heavy,” as evidenced by his participation alongside the Beatles at the famed retreat with the Maharishi Mahesh Yogi in India in 1968 where he shared guitar techniques with the Fabs, or is he a “lightweight” Dylan wannabe hanging onto Bob’s coattails as depicted in the D.A. Pennebaker documentary Don’t Look Back?  Fifty-plus years on it doesn’t really matter, if it ever did.  As with any artist, you either like their work or you don’t, and I like Donovan’s music, especially The Hurdy Gurdy Man, released 50 years ago this month.

Donovan’s record, an interesting mix of folk, pop, eastern influences, and jazz, gave us two singles in Hurdy Gurdy Man and Jennifer Juniper.  The album’s tone is set by Donovan’s tremolo voice in the title track, and by use of the tambura which was given to Donovan by George Harrison while in India.  Harrison also contributed a line which was unfortunately removed to shorten the song for the radio.  It went:

The Hurdy Gurdy Man is an enlightened teacher – in this case the Maharishi – who helps seekers awaken from their thousand years sleep to find the truth.  The song is a testament to the freewheelin’ and, uh, foggy nature of how recording sessions unfolded back then, as there were session musicians used who went on to become quite famous, though other than John Paul Jones as the arranger and bass player it’s not entirely clear who.  According to Donovan, Jimmy Page and Allan Holdsworth played electric guitar and John Bonham and Clem Cattini played drums.  Page and engineer Eddie Kramer claim Page played, though Kramer says Bonham did not.  Anyhoo… 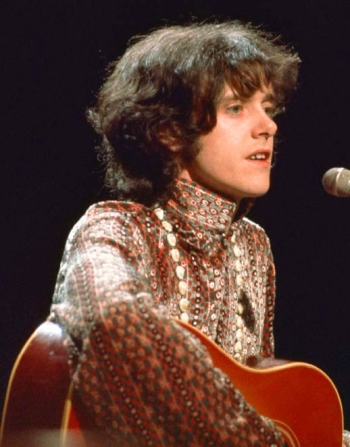 Other than the two singles, favorites for me include the tambura drone-drenched Peregrine and Tangier, the dreamy and brief The Entertaining of a Shy Girl, and the jazz influenced Get Thy Bearings.  The Hurdy Gurdy Man is a rather tidy collection of songs which hold up well to my ears.

Paul Horn – Inside the Taj Mahal

Jazz flautist Paul Horn was a practitioner of Transcendental Meditation who joined the Beatles, Donovan, Mike Love, Mia Farrow and others at the Maharishi’s ashram in Rishikesh in February 1968.  He had previously worked with Chico Hamilton, Duke Ellington, Nat King Cole, and Cal Tjader when he recorded Paul Horn in India and Paul Horn in Kashmir in 1967 (now both available on one disc).  Then, upon leaving Maharishi’s ashram after the retreat, he snuck a tape recorder into the Taj Mahal on April 25, 1968 and began playing his flute.  The guerrilla recording which resulted from it is titled Inside the Taj Mahal, or simply Inside.

The album has been described as Horn playing not only his flute, but the building itself with its long sound delay creating a type of ethereal echo which couldn’t be created in studios at that time.  A security guard was about to ask him to cease playing, but was so moved by what he was hearing that he allowed Horn to continue.  The haunting vocal on the album was improvised by a complete stranger who happened to be under the massive marble dome at the same time.  Unfortunately, he was not credited.

Inside the Taj Mahal is considered a pioneering album in the realm of “world” or “new age” music.  It’s a good choice for drifting into or out of meditation, or for the spiritually disinclined, for sinking back into a comfortable chair late at night with a snifter of brandy.  In my case, it’s both.  Paul Horn was nominated for a Grammy five times during his career.  He passed away at the age of 84 in 2014.