WARNING:  Reading about or listening to the New Barbarians may cause a context buzz.

Rock and pop music collaborations come and go.  Some of them have had lasting impacts, and we might refer to them as supergroups.  Cream and the Traveling Wilburys are a couple of obvious examples.  Many of the ones we think of were singles releases as opposed to full albums.  Queen/Bowie, Elton/Lennon, and McCartney/Jackson come to mind, among many others.  There are also less heralded musical associations which are nonetheless interesting, such as Ginger Baker’s Air Force.  Then we have the somewhat curious case of the blur known as the New Barbarians; curious because they never recorded a studio album yet they carried out a significant North American tour, and a blur because the group consisted of members of two of the hardest living rock bands on the planet:  Faces and the Rolling Stones.

The seed of the New Barbarians was planted in 1974 after the release of Ronnie Wood’s solo album I’ve Got My Own Album to Do.  In an effort to promote the album, Wood enlisted the help of Keith Richards, his Faces band mates Ian McLagan and Rod Stewart, plus bassist Willie Weeks and drummer Andy Newmark, for a gig at the Gaumont State Theatre, Kilburn, in northwest London.  The following year, Wood joined the Stones for a stint of 43 years and counting.

Five years later Ronnie needed a vehicle to promote his third LP, Gimme Some Neck, so he revisited the idea of putting together a group of buddies and heading out on the road.  The Rolling Stones were on hiatus, so Keith got on board. They were joined once again by McLagan, as well as Stones saxophonist Bobby Keys, fusion bassist Stanley Clarke, and drummer Joseph “Zigaboo” Modeliste of New Orleans group the Meters, who, as pointed out by author Rob Chapman, was not exactly a rock drummer but who joined at the recommendation of Charlie Watts (who apparently wanted nothing to do with what was sure to be another debauched musical excursion).

Jeff Beck and Jimmy Page were also considered, but their management made arrangements too much of a challenge for Wood.  Neil Young attended a couple of their rehearsals in L.A. and almost joined the group, but had other responsibilities at the time including the birth of his son and the editing of his concert documentary Rust Never Sleeps.  Neil did give the band its moniker as a parting gift though, by referring to them as a bunch of barbarians.  They added “New” to the name after learning of another band with the same name; thus was born the first “pub rock super group” as writer Jeff Giles called them.  Only they played basketball arenas and not Buddy’s Saloon on the outskirts of town.

The would-be Barbarians – Beck, Page, and Young in 1979 (I know which one I would’ve predicted wouldn’t have survived a tour with Keith…):

The shows would also serve a second purpose, at least initially.  As part of his sentence for his 1977 heroin bust in Toronto (on my sixth birthday), Richards was ordered to perform a couple of charity shows benefiting the Canadian National Institute for the Blind.  So, the first two New Barbarians shows took place in Oshawa near Toronto in April 1979 – as the support act for the Rolling Stones.  From there they dropped down to the lower 48 for 18 US dates lasting into May.  In order to mitigate any trouble Keith might run into in Canada, tour management booked the group into the Playboy Club in Lake Geneva, Wisconsin.  They would headquarter there for the Toronto and Midwestern US dates, flying in and out for each gig.  (Wha-I-um-how-oh, nevermind.  On with the story…)

Their sets combined rock ‘n’ roll, R&B, blues, and country, including a few Stones songs.  Wood sang lead on most songs (the tour was to promote his album, after all), with Keith providing lead vocals on a few numbers.  The shows have been described as “ragged,” “addled,” “sloppy,” “wired,” “half party, half rock show,” and as possessing a unique blend of “deceptively ramshackle grace” – kind of like Rock ‘n’ Roll Hall of Fame jam sessions, but much more soulful, raunchier, and with very naughty behavior taking place just off stage.  Rob Chapman, in his book New Barbarians:  Outlaws, Gunslingers, and Guitars, shares a funny anecdote as described by bassist Stanley Clarke:  On one occasion Clarke offered Richards a health shake, to which Keith responded simply, “Stanley, Stanley…” 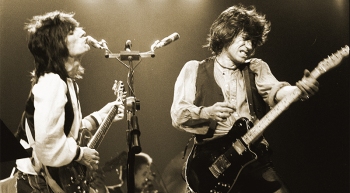 As with any outlaw rock band worth its salt, trouble was not far away from the New Barbarians.  Rumors were instigated by Wood’s management and promoters that “special guests” would appear to add a little more excitement to a show that featured mostly Ronnie singing his original songs (again, they were tasked with filling arenas, not taverns or small clubs).  But neither Mick, nor Dylan, nor Page appeared as many concertgoers had hoped.  At the Mecca in Milwaukee this caused a riot and 81 arrests.  (A makeup show took place the following year with a somewhat bizarre lineup which included Andy Newmark, Reggie McBride, Johnny Lee Schell, and…MacKenzie Phillips.  No Clark, Modeliste, or Richards.) 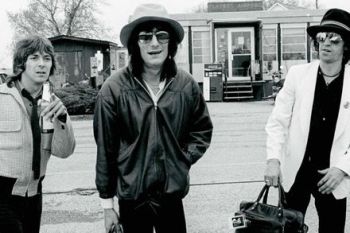 And, of course, there was heavy consumption of various substances.  Another stipulation of Richards’s drug sentence was that he attend rehabilitation counseling, but this tour was the extreme opposite.  Author Stephen Davis paints a rather bleak picture in his book Old Gods Almost Dead:

Living on alcohol and cocaine, Keith assumed a particularly spectral appearance as his hair began to gray and his face caved in, and rumors of his impending demise again spread through the music industry…Keith and Woody’s brotherly bond began to strain under financial pressures (they personally funded the tour’s excesses) and Wood’s rapid ascent into drugdom’s First Division.

Yet, a splendid time seems to have been had by all.  As Stanley Clarke later described it, it was his “100% rock ‘n’ roll experience.”  A few months later in August of ’79, the New Barbarians took the stage one final time (other than the Milwaukee make up show), on a Knebworth bill which included Southside Johnny and the Asbury Jukes, Todd Rundgren, and Led Zeppelin.  And with that, the “ramshackle grace” of the New Barbarians slipped into oblivion until 2006, when the two-disc Buried Alive:  Live in Maryland was released.  Two years later, the 1974 Kilburn show was released under the title The First Barbarians:  Live from Kilburn.

I stumbled upon the Kilburn show when it was released ten years ago.  I’d never heard of the group or tour before, but it just seemed like something I’d listened to all along.  It sounds like an audience tape or a soundboard bootleg at best, and for a show such as this it’s actually a perfect representation of the group as opposed to a clean live recording which might get a final studio polishing before its release.  The sound quality of the Maryland show is actually quite good by comparison.  There are those days (and very late nights) when these albums just hit the spot.  I was very familiar with Wood’s song Mystifies Me from Son Volt’s 1995 version which I knew and loved, but I was not aware that it was a Ronnie Wood song or that it was on that impressive list of tunes which all share the same muse.

First Barbarians in 1974, performing yet another ode to Pattie Boyd:

Sloppily yet elegantly wasted – a full New Barbarians show from the 1979 tour: