The Flying Burrito Brothers – The Gilded Palace of Sin

Today we celebrate another landmark country rock album. It was still an emerging genre in 1969, and one with band members Gram Parsons’ and Chris Hillman’s finger prints all over it. They had both played on the Byrds’ Sweetheart of the Rodeo release the previous August, with Parsons taking songwriting credits for a couple of its tracks before his blur of an association with that band ended as quickly as it had begun. Hillman followed him out of the Byrds a couple of months later, and the two formed The Flying Burrito Brothers in the latter months of 1968. Their critically acclaimed first album, The Gilded Palace of Sin, was released this day 50 years ago.

Most of the songs were written by Parsons and Hillman in their rented L.A. home, a time and scene described very well in John Einarson’s book, Hot Burritos: The True Story of the Flying Burrito Brothers, written with heavy input from Hillman. Of the eleven songs, six were co-written by Parsons with Hillman, two with Ethridge, and one by Parsons and Barry Goldberg. The other two were soul tunes which the group incorporated seamlessly into their overall sound. Both written by Chips Moman and Dan Penn, Do Right Woman was first recorded by Aretha Franklin in 1967, and Dark End of the Street was originally sung by James Carr. 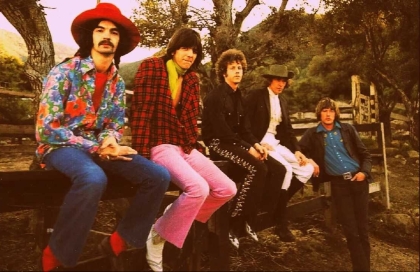 One of the elements that sets this album apart from others from the opening track is not only the absence of a lead guitar, but the inclusion of “Sneaky” Pete Kleinow’s pedal steel guitar which more than fills the void. Kleinow is vital to this recording, and he was a highly sought after session man as a result of it (see Kleinow wiki link below for a list of others he worked with). There are also three session drummers giving a few of these tracks just the right amount of snare.

There are left-leaning takes on subjects one might not expect in country music at the time with My Uncle (Vietnam) and Hippie Boy (the 1968 Democratic Convention in Chicago). There are songs I think of as classic country in Sin City, Do You Know How it Feels, and Juanita, and songs of tenderness such as Ethridge’s Hot Burrito #1. There are no bad tracks to me on this album. Personal favorites include…hell, all of them. And the overall vibe of the album was rounded out perfectly with the sequined Nudie Suits designed by Nudie Cohn and the photo session in the desert with a couple of their girlfriends in tow.

I’ve taken a somewhat cynical view of Gram Parsons in other posts due to his description of his own music as “cosmic” as opposed to simply country or country rock, but the Flying Burrito Brothers gave us something very special with this album. There’s no disputing that Parsons was passionate about both genres, and it shows here. But there were a couple of things brought home well in Einarson’s book mentioned above. Firstly, they (Gram, specifically) could’ve accomplished so much more, but Parsons had a lack of motivation which is mostly attributed to the fact that he lived off a family trust fund. Maybe he’d get out of bed, maybe he wouldn’t. Maybe he’d be sober for a performance, but probably not. Unlike the others in his band, he always knew where his next meal was coming from.

Secondly, and perhaps more significantly, the songs on this record were all co-written. Gram clearly brought plenty of talent and enthusiasm for country, but Chris Hillman and to a lesser extent Chris Ethridge deserve a lot more credit than they’re given. And without a doubt these songs wouldn’t have been as good without Sneaky Pete’s pedal steel. Call it cosmic if you want, but it was a group effort, and a great one at that.