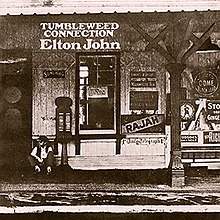 Today I’m celebrating the 50th anniversary of a landmark album for Elton John and Bernie Taupin. Released this day in 1970, Tumbleweed Connection was Elton’s third album, but his second in the U.S. (his 1969 debut, Empty Sky, was not released in the U.S. until 1975). Taupin’s songwriting was evolving rapidly at the turn of the decade, from the rather esoteric lyrics on the debut, to the standout singer/songwriter tracks on the eponymous second LP, to this gem with rather unlikely circumstances associated with its creation.

Tumbleweed is an extremely well-rounded album. While a few of its songs went on to be played somewhat regularly on the radio, the lone single from it was Country Comfort – in Australia and New Zealand only. But what makes the album distinctive? It’s a concept album whose themes are about the American west and Civil War south, what we almost generically refer to today as Americana, written and recorded by Englishmen who hadn’t yet set foot in the U.S. – and they nailed it. Bernie grew up on a diet of American western films, and combined with the influence of The Band, he and Elton were able to capture the zeitgeist of that era as well as anyone at the time outside of the aforementioned four Canadians and one Arkansan. Even the sepia toned photo on the album cover, despite the fact it was taken at a railway station in the U.K., captures the feel of the album.

Tumbleweed is one of those albums in my life that is A grade material from start to finish. In other words, I never listen to it for one or two tracks. This was the first release to include both drummer Nigel Olsson and bassist Dee Murray, who do not receive the praise they deserve in my opinion for their contributions to Elton’s success up to the mid-70’s. Tumbleweed Connection was recorded in March of 1970, EJ’s legendary live U.S. debut took place in late August at L.A.’s Troubadour, the album was released on this date, and on December 1st, Elton, Nigel, and Dee played a small college auditorium in the tiny town where I was born and grew up just under three months later. They probably had a better grasp of late 19th century America than the kids in the audience they performed for who had little idea of who Elton was and no clue of what he was to become in the ensuing months.

If interested in my top 15 Elton John album rankings, you can see them here: