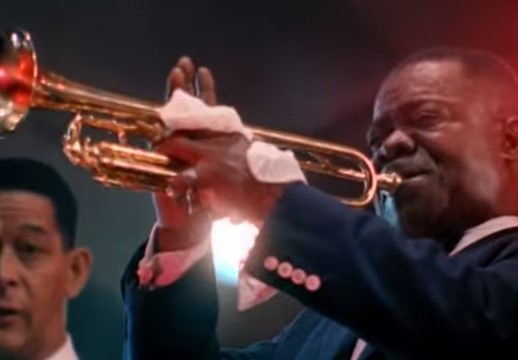 I’m participating in an album draft with nine other bloggers, organized by Hanspostcard. There were ten initial rounds, and now we’re into the third of three four bonus rounds which will cover soundtracks, compilations, music-related movies, and box sets, with draft order determined randomly by round.

I first watched Jazz on a Summer’s Day, which I rented on VHS at a local independent shop after picking up the box by chance, some time in the mid-1990’s when I was into my jazz journey. The film documents the 1958 Newport Jazz Festival, beautifully blended with footage of the America’s Cup yacht races taking place simultaneously in the bay. There is no narration other than the stage emcee, Willis Conover, and occasionally the yacht race announcer. The film was selected for preservation in the United States National Film Registry by the Library of Congress in 1999 for its cultural, historic, and aesthetic significance.

I was immediately captivated not just by the music, but by Bert Stern’s color cinematography that captured the carefree sights and sounds, from the music to the setting around the festival grounds to the party atmosphere in town and on the beach, as well as the yacht races. This is where I discovered Anita O’Day, who immediately became one of my favorite jazz singers. It’s also where I first saw performances by the likes of Thelonious Monk, George Shearing, Gerry Mulligan, Eric Dolphy, and others. The footage of a young Chuck Berry is priceless. It’s also how I learned that gospel music fit in with the jazz scene of the time, with Mahalia Jackson closing out the festival in the wee hours of Sunday morning.

The film begins with the music of the Jimmy Giuffre 3 playing a rippling sound that perfectly matches the closeup of the water in the harbor before shifting to the stage itself, and immediately I’m drawn in. As with Murray Lerner’s Festival documentary of the Newport Folk Festival, we see afternoon and evening sessions, each with distinctive vibes. When the sun is out, the crowds are very laid back and casually dressed, wearing Wayfarer and cat eye sunglasses, smoking cigarettes and munching on hotdogs and homemade sandwiches or enjoying a book. At night, it’s much more of a party atmosphere. But day or night, the attendees are hip. Also, the audiences are racially integrated, not insignificant for 1958.

In addition to the big names on stage, there are scenes of other jazz ensembles jamming off-site while day partiers with crates of beer sit in open windows and dance on the roofs of the massive Newport homes nearby in the cooler climes of the northeast U.S. summer. When the scene shifts to the evening session the crowd looks to be in a euphoric state and without a care in the world. It just looks like they’re having so much damn fun, swingin’ to the Gerry Mulligan Quartet, Big Maybelle, and Louis Armstrong before Mahalia Jackson takes it home. Everyone is smiling.

Jazz on a Summer’s Day is a wonderful snapshot of late 1950’s Americana, and captures what appears to me to be an idyllic moment in time. In my younger naiveté I assumed that all pre-1967 America was rather repressed. Then I learned about the Roaring 20’s, read Kerouac, and watched this film, where the hipsters in its scenes appear just as free as their younger counterculture siblings did nine and eleven years later at Monterey and Woodstock.