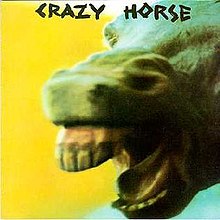 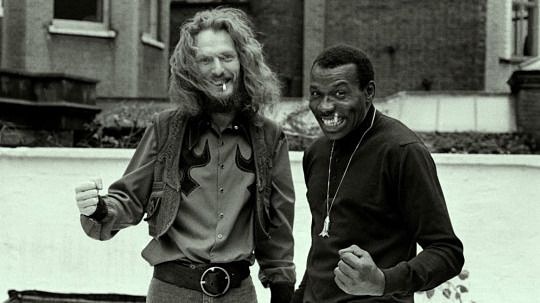 Nothing happenin…Cat’s got delusions of grandeur with no grounds. They should make him an astronaut and lose his ass! – Jazz great Elvin Jones on Ginger Baker

In an industry teeming with characters, Ginger Baker stood out. Whether it was his trademark red lion’s mane back in the day or his pissed off at the world countenance as seen in the fantastic 2012 documentary Beware of Mr. Baker, one could never rightly suggest he lacked self-confidence or balls or however you want to put it. Baker always considered himself to be a jazz drummer who played in rock bands – although he did consider Cream to be a jazz group – and he aimed to prove that as fact with his post-Blind Faith project Ginger Baker’s Air Force, which combined rock, western jazz, and Afro-jazz influences. Word of Baker’s jazz bravado seeped into the jazz scene.

When a journalist played the lengthy Blind Faith track Do What You Like for jazz great Elvin Jones, a veteran drummer who spent a career as side man for the likes of Miles Davis, Charles Mingus, Bud Powell, and perhaps most notably John Coltrane, Jones was not impressed and he made it known. As chatter between the two increased and a “battle” was on the horizon, Jones is alleged to have told an audience at one of his shows that “Baker had better put his drums where his mouth is.”

The great drum-off took place at London’s Lyceum Theatre during the Air Force tour on this day 50 years ago, when Jones joined the ensemble on Aiko Biaye and a thirty-two minute Do What You Like (YouTube link above), trading drum licks with Baker. On the latter track, the soloing begins at roughly the nine-minute mark. When the drums ceased to pound, there were smiles and an embrace. Jazz journalists called it a Jones victory while rock scribes felt Baker more than held his own. Perhaps as much as anything, the “challenge” further cemented the legend of the jazz drummer in the wrong genre where, by the way, Baker was also the greatest – at least in his own mind.

Baker would later challenge another jazz great, Art Blakey, but late in life would scoff at the notion of the events being anything other than duets which took place in the spirit of mutual respect and admiration. Either way, the colliding of two worlds certainly spiced up the music scene. 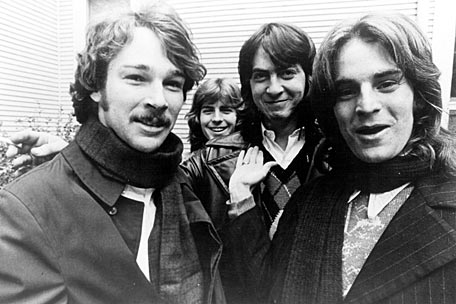 Happy 1971, friends! This is the fourth year for my blog, chronologically speaking, but since I mostly skipped the year 1969 it’s basically my third. If I were a baseball player, I’d be a streaky hitter and semi-reliable fielder. When it comes to my blogging I’m either all in or struggling to turn on my computer. I don’t know why I’m so consistently inconsistent, but writing helps keep my brain synapses firing and I mostly enjoy the process. I continue to love music from the now mostly bygone era of 50 years ago, and I’m still hearing some recordings from that era (and earlier) for the first time, so I’ll continue to babble about them in these pages.

By 1971, most of the dayglow optimism of America’s youth as found in popular music had been scraped off and painted over in various shades of gray. Songwriters were creating more introspective music reflective of that come down. Vietnam still raged on, and America’s racial and economic divide showed no sign of improving despite earlier socio-political efforts to that end (I found that filed in a folder labeled “The more things change…”). Hard drugs were taking a toll everywhere, from everyday young folk to soldiers returning from Southeast Asia, and of course on the music scene. As Joni Mitchell would lament in June of that year, “Acid, booze, and ass, needles, guns, and grass, lots of laughs…”

Some of the most popular music of the still new decade – often forgettable in any era – was vapid bubblegum dreck for people who didn’t want to know “what’s going on” in the first place.* As depressing as all this may sound, 1971 is the heart of my favorite ten year span of music. And beginning with album releases at the end of the second month of that year I can finally say I was alive when they came out. Let’s set the stage, shall we?

Bands that said sayonara in 1971: Booker T. & the M.G.’s, Country Joe & the Fish, Derek & the Dominos, Fotheringay, Free, The Mamas & the Papas, The Monkees, Gary Puckett & the Union Gap, and Sounds Inc.

There’s really nothing earth shattering about the first collection of bands listed above. Booker T. & the M.G.’s ended up re-forming, Derek & the Dominos & Fotheringay were basically one-off groups anyway, albeit with very well-known leaders who continued on, and a couple members of Free would form one of the biggest acts of the 70’s with an updated Free sound. The new acts contained part of the origins of glam, punk, disco, and new wave (and a former Beatle who dabbled in some of those genres at various points in the ensuing years), not to mention one of the most influential groups of all time when it came to future bands, yet who remain one of the most underappreciated groups ever to enter a recording studio when it comes to the masses.