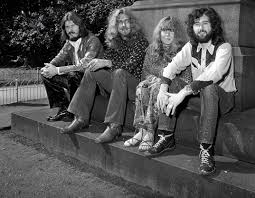 In the late 1960’s and early ’70’s there was seemingly an alternate universe of musicians and bands happening right alongside the mega groups, and in some cases (cough Led Zeppelin cough) they were a serious influence, even providing the only female vocal ever heard on a song by that parenthetical band. This was a British world of mostly acoustic “folk revival” performers including Davey Graham, Nick Drake, Al Stewart, the Pentangle, Fairport Convention, and the duo and solo acts within those groups (John Renbourn, Sandy Denny, and Richard Thompson, to name a few). There were, of course, many more. One of them was Renbourn’s duo counterpart and fellow member of the Pentangle, Scotsman Bert Jansch. He released his fifth solo album, Birthday Blues, 50 years ago this month.

The Pentangle had just released its pinnacle album Basket of Light, and Birthday Blues is basically a Pentangle album without singer Jacqui McShee or fellow guitarist Renbourn (he’s backed by the band’s rhythm section of Danny Thompson and Terry Cox on this release). It is considered Jansch’s most “pop” record, but it’s firmly in the folk and blues genre. It’s alternatively playful and moody, as the album’s title suggests. Jansch was a dynamic guitarist with a distinctive singing voice – a good combination – so if you like this style of music, there’s a lot to enjoy on this release. Miss Heather Rosemary Sewell is a beautiful instrumental inspired by his wife, who also designed the album cover. Poison is a haunting track on the folk rock side of things with heavier drums and an eerie guitar and harmonica that give a feeling of foreboding. A Woman Like You is another one in that vein.

Trying to recall what inspired me to learn about Bert Jansch, it was probably a Roots of Led Zeppelin sampler CD that came attached to an issue of MOJO Magazine or one like it around 2003 with Jansch’s 1966 take on the traditional Blackwater Side. I purchased a Best of Bert Jansch CD and was on my way. It didn’t occur to me at the time to even bother looking into whether or not he still performed live. Even if he did, it seemed highly unlikely he would pass through Texas. Then one day in 2010 I read he was going to perform at the local symphony hall – opening for and performing with Neil Young! Then I looked at the ticket prices.  Then I looked at my bank account. Wasn’t happening. A little over a year later Jansch died of lung cancer. Missing that show is a big music regret of mine.