Iron Butterfly’s second and most well-known album was released June 14, 1968.  The title track, released as a single the same day, holds an odd place in rock history in my mind.  It’s almost become a punchline due to the garbled title and the fact that it takes up the entire second side of the album.  But the album stands on its own as the highest selling release of 1969.  It was also the biggest seller for Atlantic Records until Led Zeppelin IV.

This was the English folk-rock band’s debut album, and I can’t write intelligently about it because I haven’t listened to it.  As with many other groups I’ve wanted to get to know, I familiarized myself with Fairport Convention by purchasing a hits collection before branching out, but the compilation didn’t include any songs from this self-titled debut.  Judy Dyble was the lead singer on this record, but she would be replaced by the siren Sandy Denny for the next few releases, and they are among my favorite albums from the era.  I’ll have more from Fairport Convention next January when I have a clue what I’m talking about. 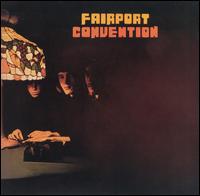 This single from the band’s debut album reached #1 in the UK and #2 in the US Billboard charts.