I’m participating in an album draft with nine other bloggers, organized by Hanspostcard. There were ten initial rounds, and now we’re into the first of three bonus rounds which will cover soundtracks, compilations, and music related movies, with draft order determined randomly by round.

Fair or not, the 1980’s is an easy target for blanket criticism of an entire decade’s worth of music. And, of course, it’s all subjective. There was a lot of really good music thirty to forty years ago, and though much of the overall obvious “80’s sound” doesn’t hold up to my ears, there are also some standout albums (did I mention this is subjective?). Mike’s choice yesterday, Purple Rain, is one of them. Another one that passes the ear test for me all these years later is a lesser known soundtrack album by Eurythmics, 1984 (For the Love of Big Brother).

I recall being given this on cassette as a random gift maybe a year after its release in 1984, and a year or so before I read the Orwell novel or watched the film adaptation. Therefore, I became very familiar with it as an album – both instrumentally and vocally driven – before I was able to relate it to a storyline. I liked it then, and I still do. Its nine tracks follow the novel’s themes, with two of them issued as singles: the danceable synth-pop Sexcrime (Nineteen Eighty-Four) (though Dave Stewart suggests the music is not synth-pop, but “Kraftwerk meets African tribal meets Booker T and the MGs.”), and the atmospheric Julia, which is a perfect fit in such a dystopian film.

There was a bit of a controversy surrounding this soundtrack. Eurythmics were commissioned by Virgin Films to create it, but Virgin failed to notify the film’s director, Michael Radford, who was not pleased to have a pop group “foisted” on him. The later director’s cut of the movie replaced most of the Eurythmics’ music with a more traditional orchestral score. Annie Lennox and Dave Stewart were also not aware that their contributions were not welcomed by the director until it was too late. I felt as a teen at the time that the music fit the film perfectly, and I feel the same today as we teeter on the edge of our real life dystopia. Eurythmics were as hot as anyone else on the early-mid 80’s pop scene, and Lennox and Stewart’s post-Eurythmics careers have proven them to be anything but synth-flashes in the pan.

In the world of film scores, some rather clearly need to be heard while watching the film in order to appreciate them.  Some are enjoyable regardless of the context in which they’re being listened to.  One such example for me is the Eurythmics soundtrack to the film 1984.  I also find the soundtracks to Wes Anderson’s films to be eclectic and enjoyable.  But a case where I can see how it could go either way for the listener is George Harrison’s score to the Joe Massot movie Wonderwall, titled Wonderwall Music, released this day 50 years ago.  It was the first solo album by a member of the Beatles, and the first recording released on their Apple label.

Harrison viewed Massot’s work, a movie full of psychedelic pop art (with sets created by the Fool) and dream sequences starring Jane Birkin and Jack MacGowran, at Twickenham Studios.  He took notes on the timing of its scenes, and then composed the music to fit accordingly.  That music would include Hindustani classical, psychedelic rock, cowboy western movie theme music, and even Ragtime.  The film itself is a metaphor for the generation gap as experienced in Swinging London, and Harrison saw it as an opportunity to examine through his compositions the gap between the West and the East, between materialism and spirituality.  As described by AllMusic’s Richard S. Ginell, the album was “a minor eruption of the pent-up energies of George Harrison.”

Harrison, who along with the other three Beatles was experiencing newfound creative independence after the death of manager Brian Epstein in late August of 1967, was given full artistic control by Massot.  He composed the music on piano and organ, and played guitar on much of the album, though on the original release he was only credited as producer, writer, and arranger.  He also collaborated with top Indian musicians as well as classical pianist and arranger, John Barham, a fellow classical Indian music enthusiast.

Harrison wanted to expand upon the Indian instrumentation that he’d utilized with the Beatles already.  In addition to the sitar and tabla, he now employed the oboe-like shehnai, the sarod, and the hammered dulcimer-like santoor, among others.  The Western tracks utilized tape loops, backward guitar sound, and wah-wah effects in addition to the more straight forward instrumentation.

Some of both the Western and Indian portions were recorded in London at EMI and De Lane Lea Studios from November ’67 to January ’68.  These sessions included Liverpool band the Remo Four, as well as Ringo and Eric Clapton (credited under the pseudonym “Eddie Clayton”).  Peter Tork played banjo on a track which was not included on the soundtrack.

The rest of the Indian sections were recorded in Bombay at HMV Studios from January 9-13, 1968.  It was in Bombay that the instrumental track to George’s future B-side The Inner Light was recorded.  The majority of the Western music was recorded upon Harrison’s return to London in January.  Final mixing with Ken Scott began on January 31, and two weeks later George returned to India with the Beatles, their wives and significant others for their retreat with the Maharishi in Rishikesh.

The album would mark the end of Harrison’s immersion in Indian music as a composer and musician.  After spending time with Ravi Shankar in L.A. a few months later, he decided to concentrate on the guitar and Western music.  This period did inspire him later in his work with Ravi Shankar on the latter’s Music Festival from India and the East/West fusion of Harrison’s 1974 North American Tour, where he worked again with some of the musicians from the January ’68 sessions. 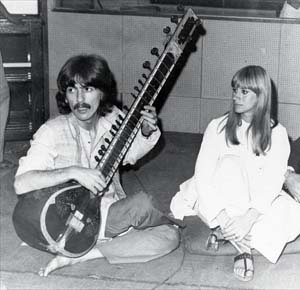 Contemporary reviews of the score were favorable.  There are sequences in the film with little to no dialogue, and it’s been noted that the music effectively takes the place of speaking parts.  Retrospective reviews also find much merit in Harrison’s efforts on the album.  It’s been described as a stew of music that’s altogether “spacey,” “esoteric,” “rollicking,” and “a beguiling tapestry of sound.”  Of course, there are different strokes for different folks.  Rolling Stone lazily included it in its “20 Terrible Debut Albums by Great Artists” issue.  RS writer Keith Harris:  “The best thing you can say about Wonderwall Music is that it’s probably more historically significant than the LP of experimental twaddle John Lennon released a month later – after all, Oasis never wrote a hit song called ‘Two Virgins.'”  The reality is, there are just many westerners who don’t care for Indian music.  And that’s o.k., because there are many of us who do.  And for many if not most of us, it’s due to George Harrison introducing us to it. 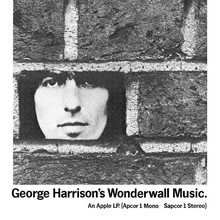 On the Bed:  probably my favorite track from the album –

Left off the original release, but fortunately added later:  In the First Place, featuring the Remo Four –

An alternate take of the instrumental track to The Inner Light, which George produced while in Bombay in January of 1968 –