Since long before 1968, westerners have journeyed to India in search of a different way of being within the confines of the material world.  But no visit has been more documented, more celebrated, than that of the Beatles when they traveled to the ashram of the Maharishi Mahesh Yogi, whose spiritual guidance they had begun receiving the previous August, in the beautiful surroundings of Rishikesh in the foothills of the Himalayas on the banks of the Ganges, northern India.

The group and their entourage arrived in two parties, with George Harrison and his wife, Pattie Boyd, her sister, Jenny, and John and Cynthia Lennon arriving on February 15.  Paul McCartney and his girlfriend, actress Jane Asher, and Ringo Starr and his wife, Maureen, arrived at the ashram on February 20.  There they joined a larger group of seekers and Transcendental Meditation (TM) teachers-in-training for a months-long immersion in meditation and lectures by the Maharishi.  Others of note at the retreat included John’s inventor-friend Alexis “Magic Alex” Mardas, Donovan, Mike Love of the Beach Boys, jazz flautist Paul Horn, as well as Mia Farrow and her siblings, including sister Prudence.

The basic story is well-known.  The Beatles had long beforehand grown weary of Beatlemania, George and perhaps John the most.  With the combination of the death of their manager, Brian Epstein (while they were in Wales being initiated into TM the previous August), and the founding of their company, Apple Corps, they were quickly becoming untethered, stressed, and looking for guidance or at least a nice holiday.  Ringo and Maureen stayed about ten days, the food problematic for his sensitive digestive system.  Paul and Jane left after about a month – Paul to supervise Apple business and Jane for an acting engagement.  The Harrisons and Lennons stayed on until April 12, famously leaving when the rumor that the Maharishi had made inappropriate advances toward Mia Farrow became fact in John’s mind due to Magic Alex whispering in his ear.  Years later they would all express regret at their behavior in leaving the ashram as they did, assigning it to their relatively young age when they were there.  This would be the final time the four Beatles traveled together.

Photos and film footage of the Beatles’ time in Rishikesh paint an idyllic picture of mid/late 20-somethings on a spiritual quest, evolving out of a life of short-lived pleasures enjoyed by elite celebrities and into something more meaningful and lasting.  But while the trip did everyone some good by most accounts, you can take the egotistic rock star out of Swinging London, but you can’t always take Swinging London out of the egotistic rock star.

Associates made sure LSD and alcohol were available, a big no-no at a spiritual retreat (duh).*  Also, John and Cynthia’s marriage was in its final throes, and he began each day with a trek to the local post office to check on the arrival of new telegrams from Yoko, to whom he would soon and almost always be attached.  And much to George’s chagrin, Paul and John spent a lot of time writing songs that would end up on the sprawling White Album later in the year instead of meditating.  Indeed, George was the single most serious practitioner among the four, and continued to be until the end of his life with lapses along the way like most of us mortals. 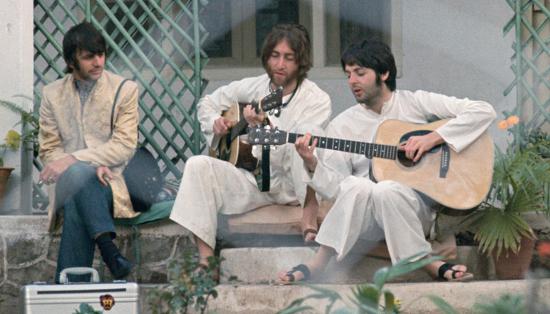 Another element to this period is the fine line a spiritual teacher walks between the teachings on one side and the commercialisation of it on the other.  Obviously the Maharishi enjoyed increased publicity worldwide as a result of his association with the Beatles, and I have no problem with that in and of itself.  When the dust of the 60’s settled, the awareness and popularity of TM became much more widespread.  This was a good thing, and the Beatles, especially George Harrison, were a major reason for it.  Was it inherently bad that the Maharishi was also a shrewd business man?  I don’t believe so.  Just as modern teachers such as Deepak Chopra and Eckhart Tolle generate large amounts of money through their writings and speaking engagements, so too did Yogananda and Vivekananda years before the Maharishi, and it was all for the better in my book.

*Subsequent to this post, I’ve read another account of the Beatles’ India Trip (Riding So High:  The Beatles and Drugs by Joe Goodden) which states the group was clean during their stay in Rishikesh.  However, within weeks Lennon would develop a heroin addiction upon meeting Yoko back in London.